HOLLYWOOD CHOIRS is a beautifully recorded, all new, choirs virtual instrument from Doug Rogers and Nick Phoenix, the producers of Symphonic Choirs, the best-selling and most awarded virtual choir of all time.

HOLLYWOOD CHOIRS features a blockbuster female and male choir with unprecedented dynamics that will instantly transform your next project into a cinematic masterpiece.

HOLLYWOOD CHOIRS also includes WordBuilder 2 (see new features below). WordBuilder allows the composer to type in any word or phrase and have it sung by the choir. 237 new ‘editable’ pre-built WordBuilder phrases in English, German, Italian, Spanish and Latin that are exclusive to this product. This is the fastest and easiest way to compose your choir tracks or the presets can be used as a starting point to create your own custom phrases. 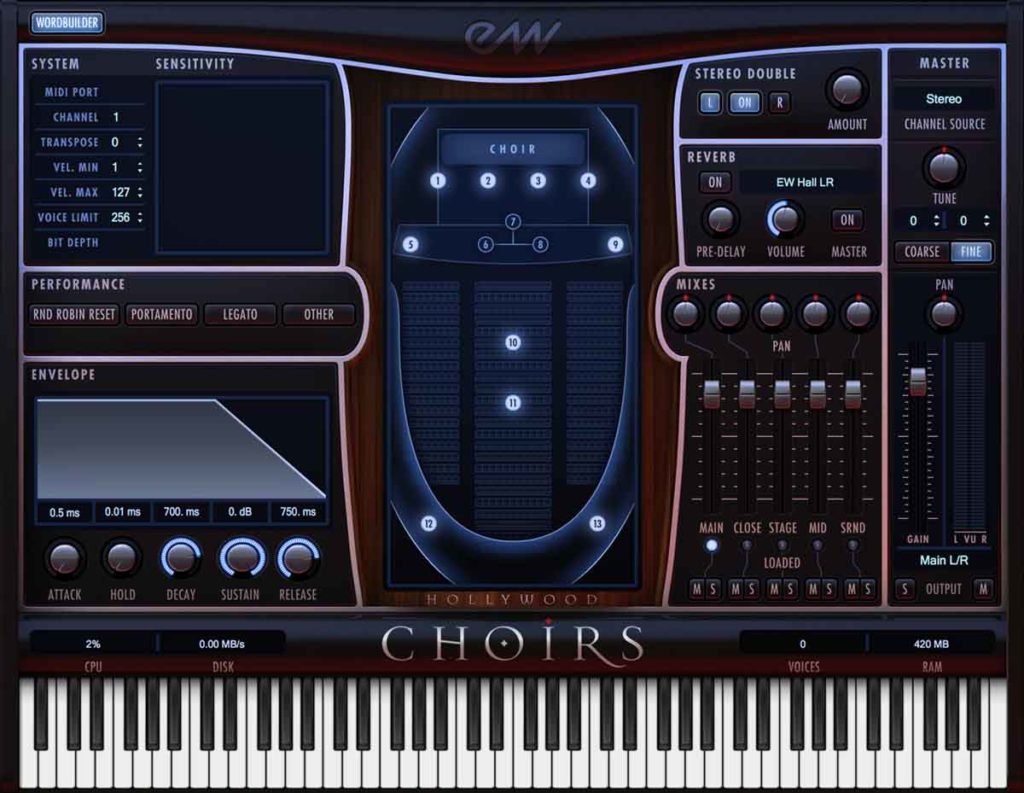 HOLLYWOOD CHOIRS Diamond Edition includes a 13 microphone user-controllable setup (including a Neumann Dummy Head) designed for surround sound and virtual reality, an essential feature for film, TV, and game composers. HOLLYWOOD CHOIRS delivers that powerful, blockbuster sound that all composers are seeking and opens up new 3D soundscapes that will help create incredible and emotional journeys for your audiences for many years to come.

“This is the third choir EastWest/Quantum Leap has recorded,” says EastWest producer Doug Rogers, “we learnt a lot from the previous productions and Hollywood Choirs is the culmination of that experience. In particular, the choirs’ ability to sing any word or phrase has been significantly improved resulting in more realism; and there are many more sound options to enable the user to sculpt the sound to their requirements.”

“In the past 12 years, there have been many attempts by others to improve on what EastWest/Quantum Leap achieved with Symphonic Choirs,” says EastWest producer Nick Phoenix, “Small improvements were made to various aspects of choir sampling, but the emphasis has been on pre-recorded and severely limited phrases. If composers are not tired of hearing the same faux Latin phrases repeated over and over, those listening certainly are. No single choir virtual instrument has managed to deliver a fluid, intuitive and great sounding choir that was capable of singing any words in any language, soft or loud … until now.”

A New and Improved WordBuilder

Hollywood Choirs includes a new version of WordBuilder, the program that allows you to type in words and have them sung by a choir. Please see below for descriptions of these new features, plus many under-the-hood enhancements.

Below are the minimum and recommended hardware requirements for using Hollywood Choirs on your computer. Please see the Play User 6 Manual for a complete list of the Hardware and Software Requirements for installing and running any Play Library.

Garritan
$119.00
350 instruments from around the world to add exotic sounds to your music
Add to wishlist
Add to cart
Quick view
Compare

Garritan
$59.95
The CFX Lite is a subset of the CFX Concert Grand that retains all of the expressive detail of the original by providing the full power of the Close Classic mic perspective. Today you can download stellar piano sounds at an affordable price.
Add to wishlist
Add to cart
Quick view
Compare

$399.00
Compare
Add to wishlist
Start typing to see products you are looking for.