Risers, build-ups, breaks, downlifters, swells, sweeps, falls – it has never been so easy to hype your audience with a beat drop. Forget samples, just turn the knob or let liftFX even do that for you, automatically, in beat sync at the length you need it to be.

Build-ups and risers are core parts of modern music and trailer productions. They’re essential as it is them who catch you and generate an unstoppable tension over time, crawling upwards from the stomach to the chest, culminating in an irrepressible peak that can move a whole stadium of people. LiftFX will help you achieve just that. 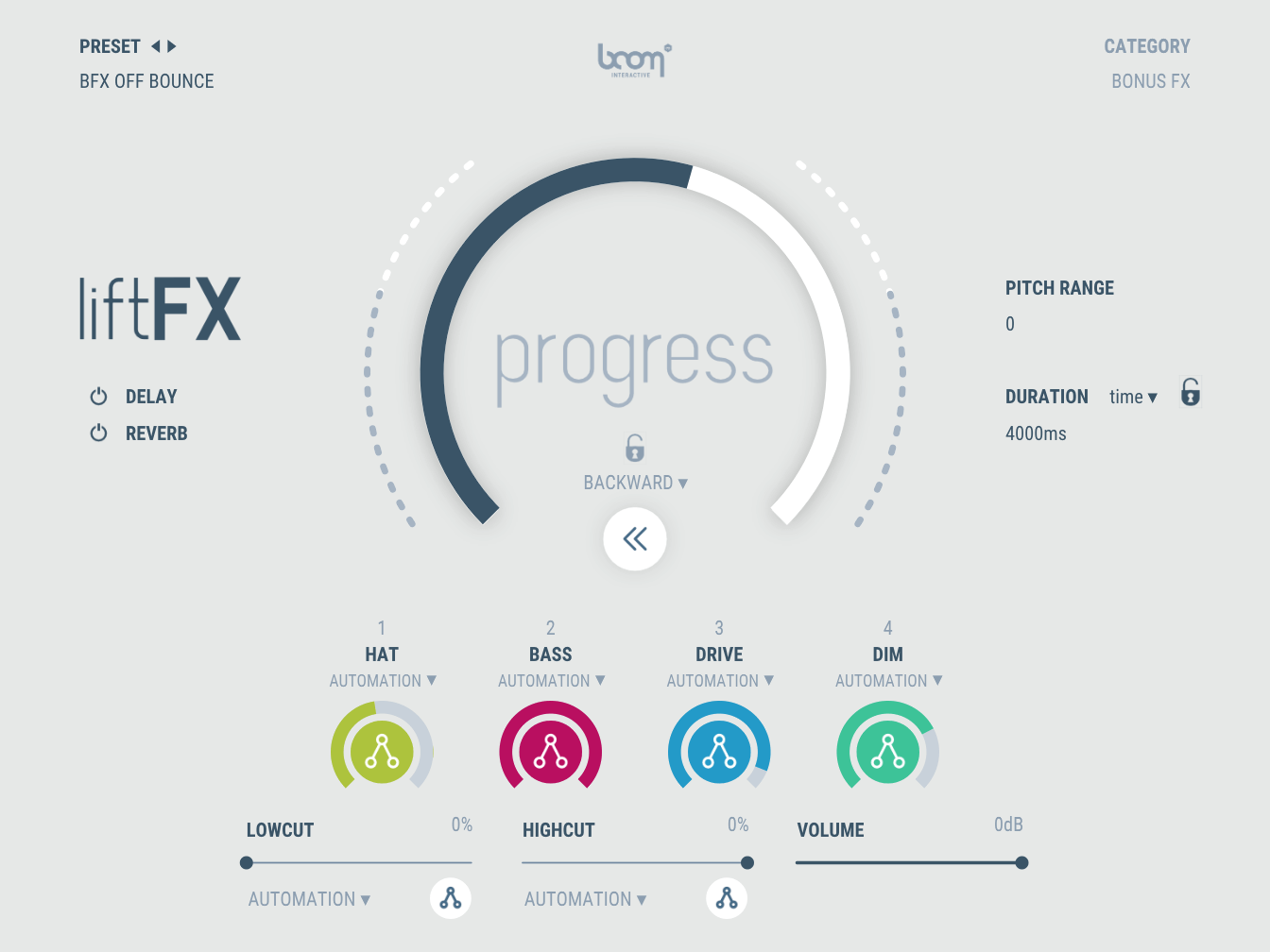 Feel the power of liftFX at the first keystroke. Instead of spending hours on designing custom risers, allow liftFX to kickstart you right to the fun part:
Playing and hearing firsthand the effect liftFX’s bold sound achieves while building, dropping, breaking or wildly flailing along to your track.

We’ve set the table – it’s up to you to polish the diamond and let your creativity bring the final picture together. Time to make some noise!

Dragging samples into your project might seem easy at first, but your mileage will vary drastically. Now you have to worry about syncing them to your track, tune them (which at best isn’t very fun and generally leaves hideous artifacts) as well as agonize over the fact that their individual components can’t be altered – other than adding destructive effects on top.
LiftFX relies on real-time synthesis to generate impressive sonic builds on the fly. Every of the above aspects is freely alterable with no more than a few clicks – all while remaining sharp, crystal-clear and flexible over insane lengths.

LiftFX is built on the synthesis engine of our award winning TURBINE plug-in.

While Turbine emulates turbojet sounds with unparalleled precision and authenticity, LiftFX takes the original concept further and pours all the experience and synthesis technology gathered since then into musical FX.

Like TURBINE, LiftFX doesn’t like to be limited to just one category. Take it for an experimental spin, abuse it and see what pops up. As we keep re-discovering our own plug-ins months down the line, we’re excited to see what you can come up with.

LiftFX works as a generator plug-in or virtual instrument.

Hit a any key and let the effect develop automatically or use your modwheel to control it live.

LiftFX comes with a 275-strong package of inspired presets:

Risers, downlifters – both tonal and noise-based and everything in between.
Bass drops.
Rhythmic and percussive builds.
Basic and more complex designs.
Bonus FX.

The intuitive interface gives you an instant idea of what’s happening.

Don’t be fooled by its one-trick-pony appearance!
Each of the four macros is automatable independently and lets you steer the complex processes happening under the hood.

ANY TIME, TEMPO AND TONAL RANGE

Quickly adapt your sound to any track or sequence you so desire.

While LiftFX starts out in perfect sync to your DAW, really any pitch, duration or tempo is possible.

Using timelock to the right, you can try out different presets while keeping the same length.

The Bundle gives you the full sound design power as it contains both – the DESIGNED and the CONSTRUCTION KIT edition at a discounted price.

$95.00
Compare
Add to wishlist
Start typing to see products you are looking for.