A complete orchestra at your fingertips 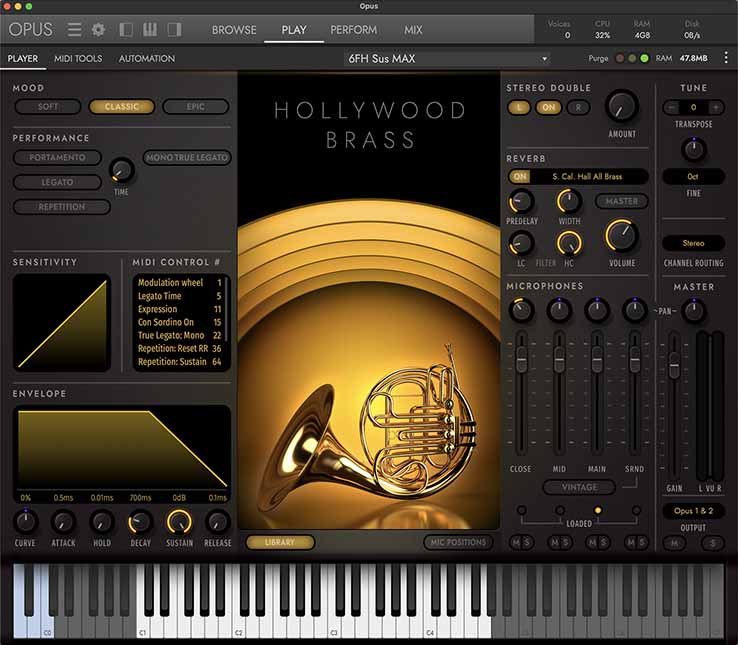 Brand new recordings include a new 18 violin string section for Hollywood Strings, new ensembles for Hollywood Brass and Hollywood Orchestral Woodwinds, plus new string, brass, and wind multi ensembles. The programming of the original content from Hollywood Orchestra and Hollywood Solo Instrument Series have been updated to take advantage of the features included in the new Opus software engine. Particular focus was placed on Hollywood Orchestral Woodwinds. After improving the original woodwinds, new ensembles were recorded, including 3 bassoons, 3 clarinets, and 3 flutes. The Opus Edition also includes new string, brass and wind multi ensembles that have a unique fat sound that captures the tuning of a large orchestra playing together in a live setting. 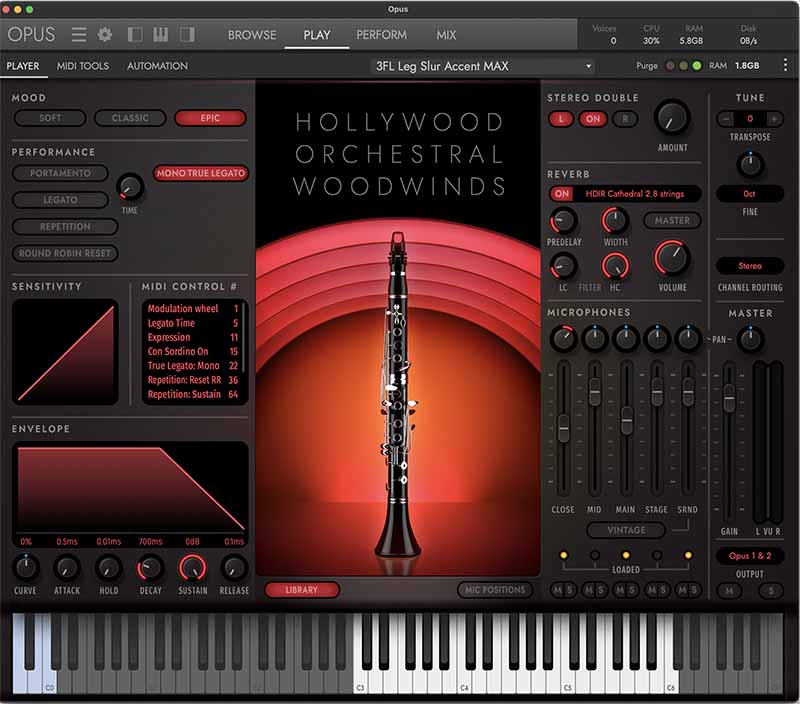 Powerful new control features include Master key-switches where all articulations can be fully customized in the new OPUS articulation palette. You can also customize the sound of each instrument using the new MOODS feature. Classic Mood is the original Hollywood Orchestra sound. Soft Mood modifies the sound for slower, more emotional passages. Epic Mood does the opposite, giving you a sound perfectly suited for your next Action Adventure score. Each mood changes the settings and the look of the interface, which has been completely redesigned and stylized for Hollywood Strings, Hollywood Brass, Hollywood Orchestral Woodwinds, Hollywood Orchestral Percussion, Hollywood Solo Violin, Hollywood Solo Cello, and Hollywood Harp.  In addition, all instrument versions have been simplified down to LITE and MAX, making Hollywood Strings much easier to navigate. The MOODS feature requires the Diamond edition that include all mic positions mixed by Shawn Murphy. Gold users will not experience MOODS as they were designed.

Multiple Academy Award and BAFTA winner Shawn Murphy was brought back to sound engineer all the new recordings. Shawn Murphy is one of the most prolific sound engineers and mixers in the history of cinema. Shawn Murphy has created special mic mixes for Hollywood Orchestra Opus Edition, including an additional recorded mic position for all new instrument ensembles that is made up of all “off-axis” close mics that were open, but not played directly into. This extra mic position is perfect for capturing the larger sound of EastWest Studio One, the home of countless Hollywood film and television scores.

The brand new OPUS software engine replaces PLAY and has been years in development. Not only is it faster, more powerful, more flexible, and better looking than PLAY, it comes with some incredible new features such as individual instrument downloads, the ability to start playing instruments while they’re loading, customized key-switches, new effects for the mixer page, scalable retina GUI upgrades for legacy products, a powerful new script language, and many more features that allow you to completely customize the sound of each instrument. 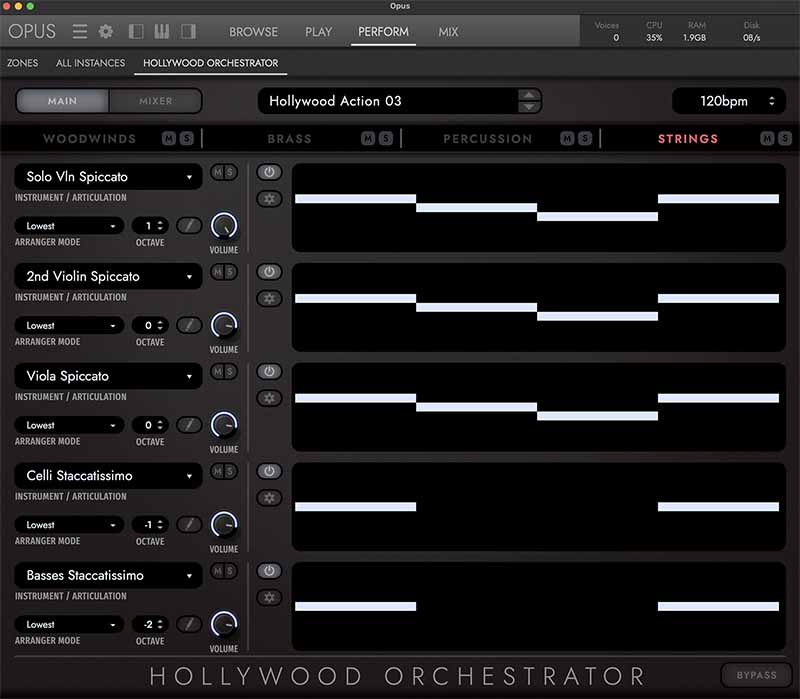 What is the difference between the Gold and Diamond versions of Opus?

The Diamond version, which you can purchase or access with the ComposerCloud Plus subscription, is 24-bit samples with all mic positions.

The Gold Edition has been discontinued.

Below are the minimum and recommended hardware and software specifications for using Opus on Windows and MacOS systems.

The list below outlines the MacOS and Windows 64-bit operating systems and sequencers that are officially supported and fully tested with the latest version of Opus.

Please note! Most Sequencers / DAWs are VST 2, VST 3, AU and AAX plug-in format
compatible, but only those listed are officially supported.

1 Sibelius / Finale / Dorico notation programs work with Opus, but do not support the full feature set of some East
West Libraries, such as those that use WordBuilder. Please contact support for details.

Garritan
$119.00
The first virtual instrument library with the sounds and techniques of jazz and big band playing
Add to wishlist
Add to cart
Quick view
Compare

Garritan
$119.00
A complete orchestra with over 500 instruments to choose from, including technique, articulations, performance spaces and reverb.
Add to wishlist
Add to cart
Quick view
Compare

Garritan
$59.95
The CFX Lite is a subset of the CFX Concert Grand that retains all of the expressive detail of the original by providing the full power of the Close Classic mic perspective. Today you can download stellar piano sounds at an affordable price.
Add to wishlist
Add to cart
Quick view
Shopping cart
close

$795.00
Compare
Add to wishlist
Start typing to see products you are looking for.