HOLLYWOOD STRINGS offers unprecedented control over sound and performance, and is a must have compositional tool for serious composers.

From the violins down to the basses, these string sections have a lovely sound, texture and feel, with a rich, full symphonic sound and an opulent quality that comes from combining great players with a great sound engineer. There’s no doubt that the fabulous sound, musical versatility and depth of expression of HS place it in the highest echelon of professional string libraries. If you’re serious about orchestral sampling, you won’t want to let this impressive strings library pass you by. — Sound on Sound 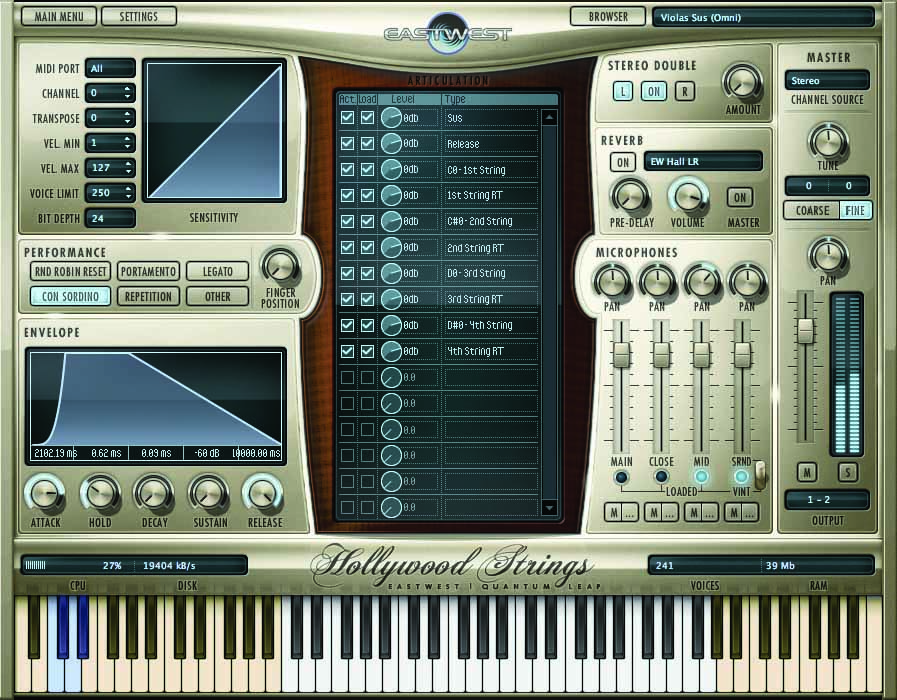 Recording for HOLLYWOOD STRINGS took place at the famous EASTWEST STUDIO ONE, the same studio where many Hollywood soundtracks and television themes were recorded with a live orchestra. Heading this project were co-producers DOUG ROGERS, NICK PHOENIX and THOMAS BERGERSEN and sound engineer SHAWN MURPHY.

“Murphy was an obvious choice for this project; who better to obtain that quintessential Hollywood sound other than someone with his credits,” says Rogers. “HOLLYWOOD STRINGS looks to expand on the success we achieved with EASTWEST/QUANTUM LEAP SYMPHONIC ORCHESTRA by providing a perfect large scoring stage sound and a more intimate scoring stage sound with divisi capability.”

“The sound of these virtual strings are as good as it gets,” says Phoenix. “We have one of the top sound engineers in the business, a famous and beautiful sounding recording studio, the most incredible selection of microphones available, the best analog and digital recording equipment, and top Hollywood string players – how could we go wrong?”

“I’ve used many virtual orchestras over the last decade, including some I developed with other composers, and some I developed myself. With each new development, I got one step closer to my ideal compositional tool.” says Bergersen. “HOLLYWOOD STRINGS includes features that I consider necessary if you want to create realistic orchestral strings on your DAW.”

HOLLYWOOD STRINGS has many groundbreaking features not found in any other collection. Finger position is, for the first time, controllable by the user, so you can play as far up the strings as you want, and get a fuller more romantic Hollywood sound. Vibrato intensity and extensive dynamics are controllable by the user. Extensive multi-dynamic true legato has been sampled for all sections in three different categories: slurred, portamento, and bow change. This results in unsurpassed legato performance that has never been available. HOLLYWOOD STRINGS has five user-controllable mic positions, including main pickup (Decca tree), mid pickup, close pickup, surround pickup, and an alternate vintage circa 1945 RCA ribbon room pickup.